Epigraphy, or the science that studies inscriptions, is one of the cornerstones on which the reconstruction of ancient history is based. But the inscriptions share a very widespread destiny: the course of time and events in fact ended up damaging many of them, making some of them almost illegible. Not to mention the problems relating to dating and the original location.

Today, however, we have the opportunity to exploit Artificial Intelligence and shape highly specialized tools capable of performing or enormously simplifying specific tasks. And so it was born Ithaca, the system developed by DeepMind of Alphabet (aka Google) together with the Department of Letters and Philosophy of the Ca ‘Foscari University of Venice, the Faculty of Letters of the University of Oxford and the Department of Computer Science of the University of Economics and Commerce of Athens.

In particular, Ithaca is a deep neural network designed for the reconstruction of the text of the ancient Greek inscriptions, but also to assist scholars in the difficult path of geographical attribution and chronology.

Ithaca’s architecture is based on collaboration, that is, it relies in any case on the ability of scholars to interpret the results provided: it is a tool designed to assist and expand the workflow of historians, not replace them. And to make the research available to the research community, it was even launched a free interactive version of Ithacaand the code has been made open source.

THE SYNERGY WITH THE FUNDAMENTAL HUMAN COMPONENT

Ithaca, whose name is clearly taken from the homeland of Ulysses, is however not an original creature, but takes its inspiration from a previous project, Pythia (another name of Greek descent: the pythia was the priestess of Delphi who referred to the responses oracle of Pythian Apollo), which provided the basis for the current system.

The system was trained based on the largest digital Greek inscription dataset available, or that of the Packard Humanities Institute. Starting from this information, the AI ​​interprets the inscriptions providing scholars with various hypotheses of textual restoration. 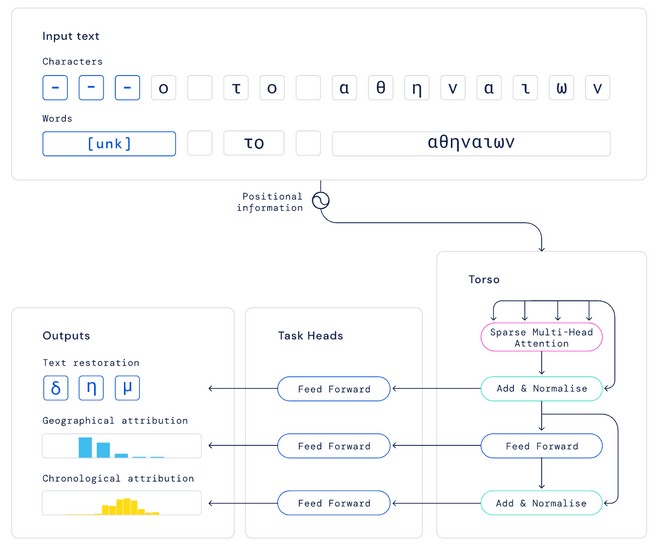 As mentioned at the beginning, Ithaca is not limited to just filling in the holes of the damaged inscriptions, but it also provides data on the possible original positions with an estimated accuracy of 71%.

As regards geographical attribution, historians are given a probability distribution on the various hypotheses in place of a single output, in order to favor the interpretative task of the human component. These results are also displayed on a map in order to give an immediate glance that can highlight any geographical connections within the ancient world.

Finally, there is the chronological attribution: Ithaca when given a text produces a distribution of the hypotheses in all the decades starting from 800 BC up to 800 AD with an accuracy of about 30 years with respect to the actual date. However, the way in which the data is presented is always designed to facilitate the task of scholars who can thus clearly visualize the reliability of the model for specific date ranges. 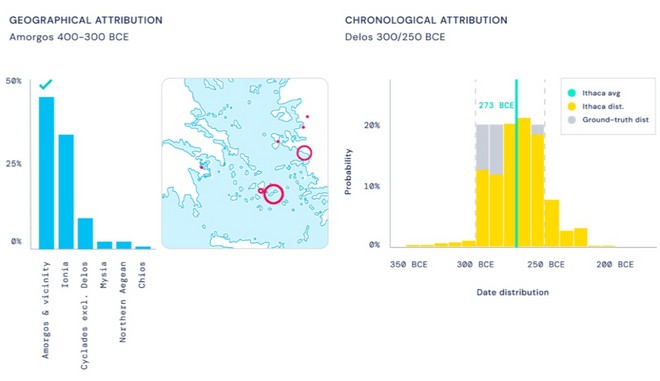 Ithaca is therefore already today a very precious tool to assist historians, especially considering that the principles that regulate its functioning (you can find them described in more detail at the link in SOURCE) can also be applied to other languages, not only to ancient Greek. And indeed if Ithaca alone achieves an accuracy rate of 62% in the reconstruction of damaged texts, the use of Ithaca by historians has improved its accuracy from 25 to 72%thus confirming how the synergy between Artificial and Human Intelligence is the most efficient option.