There are concrete possibilities according to scientists that many of the pits on the Moon’s surface could be the visible end of buried caverns, and ESA wants to see this clearly. The European Space Agency plans to also explore the hidden areas of the Moon (and not looking for water, the presence of which is already certain). To do this, however, a special rover will be needed, which is already in the design phase.

A glance inside a lunar cave would be a real exploration, it could reveal unexpected scientific elements – said the Italian Francesco Sauro, 38-year-old Paduan consultant to ESA.

ESA has set up a working group of over 60 scientists and engineers to identify the best means by which to tackle the exploration of the lunar tunnels. The two winning projects were the crane – robot RoboCrane and the drone – explorer Daedalus: the first would lower the second inside a tunnel, so as to map it and explore it from top to bottom. Although the idea was judged feasible by the experts consulted by ESA, the challenges to faceHowever, they are not indifferent, because the necessary technologies have never before been used on the Moon. 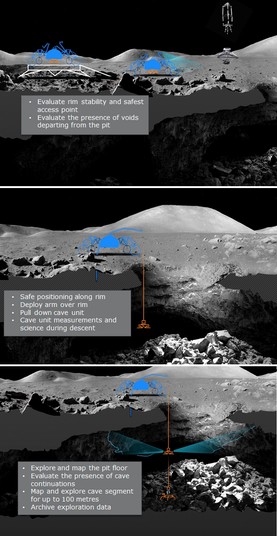 A mission of this type – continued Sauro – requires it development of innovative technologies. The space industry should be produced in unprecedented solutions compared to those envisaged for previous missions to the Moon: this kind of technological progress would represent an important step forward for lunar explorations but also for those involving Mars.

The objective, given the tenor of the challenges, is long-term. ESA has given itself about a decade to launch an Ariane 6 rocket which through an EL3 (European Large Logistic Lander) takes the crane and the rover to the surface of the Moon so as to start an exploration of two Earth weeks or a single lunar day, depending on the point of view. More accurate information on the project will be provided next year, when a conference on the theme of the exploration of the lunar cavities will be held.